Update: Unfortunately, due to Covid19 and the ensuing social responsibility, Mockus in Calgary has been cancelled. I want to thank the cast and crew who put so much energy into the production. I’m saddened that your efforts may not make it to stage this year, but your work on the play is appreciated.

I am so excited that my play Mockus will be receiving its premier production in Alberta in just a few weeks (Mar. 26-Apr. 4th, Jupiter Theatre Company at the West Village Theatre. Details here: https://www.theatrejupiter.com/mockus. I first wrote this play quite a few years ago after hearing activist Mary-Wynne Ashford speak at TRU about the anti-politician Mayors of Bogotá, Colombia, particularly Antanas Mockus, and by the description in her book Enough Blood Shed: 101 Solutions to Violence, Terror and War. Mockus employed creative antics, such as replacing corrupt traffic cops with street mimes and developing a “vaccine against violence” to encourage people to overcome the city’s severe social and environmental ills, with varying degrees of success. Mockus held the Mayor’s office twice, from 1995-97 and 2001-2003. Since he attacked corruption, he faced stiff opposition and was called a clown. This gave me an idea…. 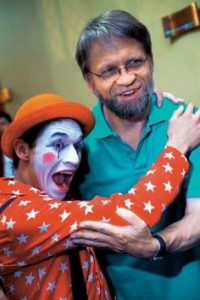 The more I read about Antanus Mockus, the more I was inspired by him, and I realized that I couldn’t not write about him. He provoked incredible change for the better in his city in a very short time period. He became one of my few heroes. It seems to me as though we have too many super heroes and not enough real heroes like Mockus. Although he hailed from an immigrant Lithuanian family, he managed to challenge the power elite and inspire ordinary people through his brilliant social experiment, treating Bogotá as a massive classroom. Trained as a philosopher and mathematician, he realized the crucial importance of the arts and creativity in bringing about social change, and in a so-called developing country. I thought, we have much to learn here, and we need to hear this story in North America.

When I began this project, George W. Bush and Stephen Harper were in power, and my feeling was that we desperately needed to change how we do politics. I could not have predicted how political divisiveness would increase since then. Mockus takes a playful, creative approach to politics and will make you laugh (as well as cry) – don’t we need more playfulness, creativity and empathy in today’s world?

If you live in Calgary, I hope you get a chance to enjoy the show. Jupiter Theatre hopes to take it on the road this summer, so stay tuned for updates! 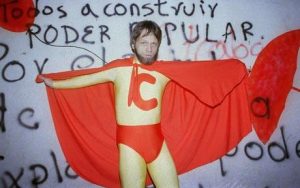 December 1, 2016. Colombia’s Congress debated, then voted to ratify, the government’s revised peace accord with the FARC guerrilla group after 52 years of civil war. A war that scarred the lives of over 8 million people, approximately 15% of the population.

How on earth did Colombia make it to this point, after fifty-two years of civil war?

The answer is as muddy as Colombia’s Magdalena River, but we can tell you that an amazing, inspired man named Antanas Mockus played a significant role.

Imagine it’s 1993 in Bogotá, Colombia, a city of approximately 4,000,000 people. It’s crime-ridden and drug-ridden. Social cleansing vigilante groups, sometimes working with police complicity, have killed at least 2000 waste collectors, beggars, and prostitutes – they refer to them as “disposables.”

Over on the academic front, the President of the National University has just mooned an auditorium of unruly students. Enter Antanas Mockus, said President.

His defence: “innovative behavior can useful when you run out of words” he claimed, and also that his act was a type of “symbolic violence.”

In the uproar that followed, he was forced to resign. So, naturally, he decided to run for Mayor of Bogota. And, naturally, he won. Even though, as he admitted he did not even know the city’s police code when he took office.

A mathematics professor and a philosopher – what an unlikely person to become Mayor. And yet, Mockus was just the person that people wanted, someone not mired in traditional political thinking, someone with innovative, creative ideas.

He wrote that, “knowledge empowers people. People know the rules, and are sensitized by art, humor, and creativity, they’re much more likely to accept change.” He also said, “we need to create a society in which civility rules over cynicism and apathy.”

Nice sentiments, but how did he actually put this into practice? Well, for one, he distributed 350,000 thumbs up and thumbs down cards to ordinary citizens and asked them to use them. If they saw someone doing something positive, like picking up trash, they showed them the thumbs up sign; when they observed someone doing something negative they showed them the thumbs down sign, without approaching them. Many people carried this out actively – and peacefully.

Mockus also mobilized people to protest against violence and terrorist attacks. He invented a “vaccine against violence,” asking people to draw faces of those who had hurt them on balloons, which they then popped. About 50,000 people participated in this campaign.

He held voluntary disarmament days in 1996 and again 2003. Though people turned in less than 1% of the firearms in the city, homicides fell by 26%, thanks for part to the attention given to the program by the media.

He launched a “Night for Women” and asked the city’s men to stay home in the evening and care for the children; 700,000 women went out in the first three nights Mockus dedicated to them, flocking to free, open-air concerts. They flooded into bars that offered women-only drink specials, and they strolled down the central boulevard that had been converted into a pedestrian zone. In this patriarchal society, this initiative met with opposition and about 200,000 men went out that night, some of them angrily calling Mockus a clown; however, most men graciously embraced Mockus’s campaign. In one neighborhood, when women saw a man staying at home, carrying a baby, or taking care of children, they stopped and applauded.

He also dealt with pressing environmental issues with characteristic flair and effectiveness. When there was a water shortage, Mockus appeared on television taking a shower and turning off the water as he soaked, asking citizens to the same. In just two months people were using 14% less water, a savings that increased when people realized how much money they were also saving because of economic incentives approved by Mockus; water use dropped by 40% during his term.

He fought continuously against corruption, closing down the transit police because they were notoriously bribable, and replacing them with 420 mime artists, to make fun of traffic violators. He said, “it was a pacifist counterweight. With neither words nor weapons, the mines were doubly unarmed. My goal was to show the importance of cultural regulations.”

He vigorously opposed patronage in city hirings, to the point where he was called an anti-patronage fundamentalist. One can only imagine that he laughed this off as his campaign became successful.

Perhaps most impressively and incredibly, he asked citizens to voluntarily donate an extra 10% in municipal taxes. Many scoffed, until 63,000 people donated. If so many people willingly parted with their money in order to see their city flourish, Mockus must have been doing something right, wouldn’t you say?

It’s no wonder that he became Bogotá’s supercitizen. He actually dressed up in a superman-like cloak, bulletproof because of threats against him, but with characteristic fearlessness and courage he had a heart-shaped piece cut out of the flak jacket over his heart.

By the time his term ended, his initiatives had become so well-known and empowering that he was asked by several US universities to share lessons about civic engagement. I wonder whether the Yanks could use his wisdom once again?

He then ran for president of Colombia several times, without electoral success. However, in 2010 when he ran for the Green Party, he unleashed a green wave of support from young people, and arguably might have won the election had it not been for considerable corruption. This is detailed in the documentary Life is Sacred. Although supporters urged him to contest the election, he refused to, saying that it would destroy people’s faith in the electoral process.

Instead, when he saw that his opponent Juan Santos had started to put into practice Mockus’s platform, remarkably he joined forces with the new President.

Even though Antanus Mockus now suffers from Parkinson’s disease, he is still active in politics, most recently as a Senator for the Green Alliance Party, and he remains controversial. He was just removed from his seat on a technicality because his think tank had a contract in the province in which he was elected. https://colombiareports.com/colombias-anti-corruption-party-leader-removed-from-congress/. Nevertheless, he has inspired a whole new generation of so-called alternative, anti-corruption politicians in Colombia.

Mockus continues fighting for peace and justice. This is perhaps best captured when he dismantled a rifle at a public rally and urged ordinary Colombians to turn in their weapons and vote for the peace accord. His motto: “Life is sacred.”

More information on Mockus can be found here:

How Hope Became an Activist